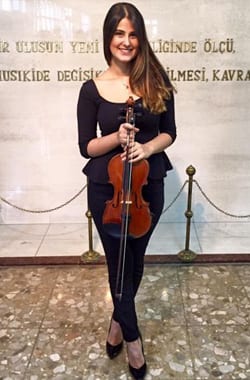 Originally from Turkey, Aleyna began her music studies at the age of 8, at the Dokuz Eylul University State Conservatory in Izmir. She moved to Dublin in 2017 and is currently studying Music Performance at the Royal Irish Academy of Music under Michael D’arcy.

Aleyna has been a member of the Royal Irish Academy of Music Symphonia Orchestra for the last 2 years, and has been teaching violin and piano to children and adults of all ages for many years, both privately and in music schools across Europe.