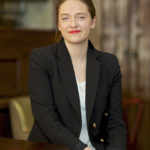 Aoife Mac Alister (ARIAM, BA, BMus, MMus) studied piano with Brian Beckett at the Royal Irish Academy of Music for over ten years. She was awarded the RIAM Gold Medal for piano performance with distinction, the Certificate in Piano Performance, and the ARIAM diploma in piano teaching. During her time at the RIAM she was also tutored by visiting professors, including Christopher Elton, and studied Lieder & song accompaniment under the tutelage of Dearbhla Collins and Kathleen Tynan.

Aoife completed her BA and Bachelor of Music degrees at UCD and continued on to complete the Master of Music degree at King’s College London, which she was awarded with distinction.

Aoife has been the recipient of a number of awards including the Aer Rianta Young Musician of the Year award and a Permanent TSB High Achiever award. She was also a prizewinner at numerous piano and chamber music competitions including the Dublin Feis Ceoil, the RIAM Festival, Sligo Feis, Arklow, and Newpark music festivals.

After a time living in London, Aoife returned to UCD to continue her academic studies with a Postgraduate Diploma in Philosophy. She is now very much looking forward to returning to music teaching and becoming a member of the team at Mezzo Music Academy.