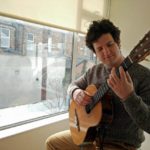 Chien Buggle is a classical guitarist and teacher from Rathmines. Like many guitarists Chien started out playing electric guitar in various groups before rediscovering his childhood love for classical music. He holds a degree in music from Trinity College Dublin, where he specialised in composition and studied with Donnacha Dennehy. For the last five years he has been studying classical guitar privately with Dr. Pavlos Kanellakis; during which time he has obtained both Associate and Licentiate performance diplomas from Trinity College London. In 2014 he won first prize in the Feis Ceoil for his interpretation of Bach and hopes to continue his studies with a masters in performance in 2015.

An active performer, Chien has performed both solo and in various groups in many venues around Dublin including the National Concert Hall, and in master classes for Elena Papandreou and Nicholas Goluses.

Chien has enjoyed teaching guitar for many years, during which time he has taught individuals, groups, students of all ages and helped to prepare guitar ensembles for performances.