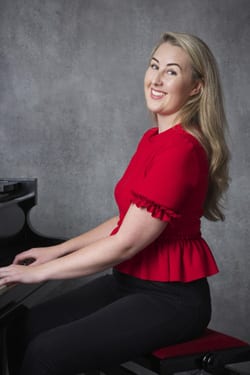 Originally from Wexford, Fianna Rossiter began her musical journey at the age of 8, as a student of County Wexford School of Music. At the age of 10, she began studying voice with Marketa Malcova of Scuola del Canto Libero, Wexford. Growing up in Ireland’s opera capital, she fostered a love of opera from a young age after attending her first Wexford Festival Opera. The rest, she says, is history. In 2012, she made her operatic debut as Pamina in Scuola del Canto Libero’s production of Scenes from Mozart’s Die Zauberflöte.

Fianna was no stranger to the stage growing up, performing with groups such as Wexford Pantomime Society and Wexford Light Opera Society. She spent her youth in Wexford performing, and practising! In 2010, she began her piano studies with renowned Irish composer, conductor and song writer, Sue Furlong, who introduced Fianna to the world of composition. In 2018, she graduated from Trinity College Dublin, completing a B.A. (Hons) in Music, specialising in music composition, under the supervision of Dr. Evangelia Rigaki.

Since graduating, Fianna has continued to study voice under the tutelage of Canadian soprano, Catherine Redding-Ryan, while simultaneously establishing herself as a performer and teacher in Dublin.

Fianna teaches with a philosophy of inspiring a lifelong love of music in her students!