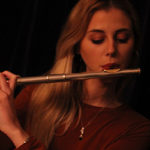 Sophie began her musical studies at the age of four, with classical flute and piano lessons. After completing her exams, and as her musical interests broadened, she went on to complete exams in recorder and took lessons in contemporary keyboard. She continued her tuition in flute and piano post grade 8 in her third level education at the DIT Conservatory of Music and Drama, from where she obtained her music degree, majoring in Musicology. She was also awarded an Associate Diploma with distinction from Trinity College London for flute.

Sophie has had many classical performance opportunities in Ireland and abroad, including the Irish Youth Wind Ensemble, the Yorke Trust Orchestra Norfolk and performing on stage alongside James Galway in the National Concert Hall Dublin. As well as her love of classical music, Sophie has an interest in modern music and has performed at many music festivals across Ireland such as Electric Picnic.

As a teacher, Sophie has a keen interest in motivating her students to progress and realise their full musical potential, whatever their instrument, musical style or interest.